StackOverflow released the results of its 2017 Developer Survey. The survey covers a ton of ground including where developers work, how they feel about their pay, which languages and frameworks they like or dislike and much more. I am not going to go into all of the results but wanted to share some thoughts that I had while reading the results.

A Significant Number of Developers are Relative New to the Job

Taking a look at the number of years coding professionally, it becomes clear that a significant portion of developers are very new to the job. 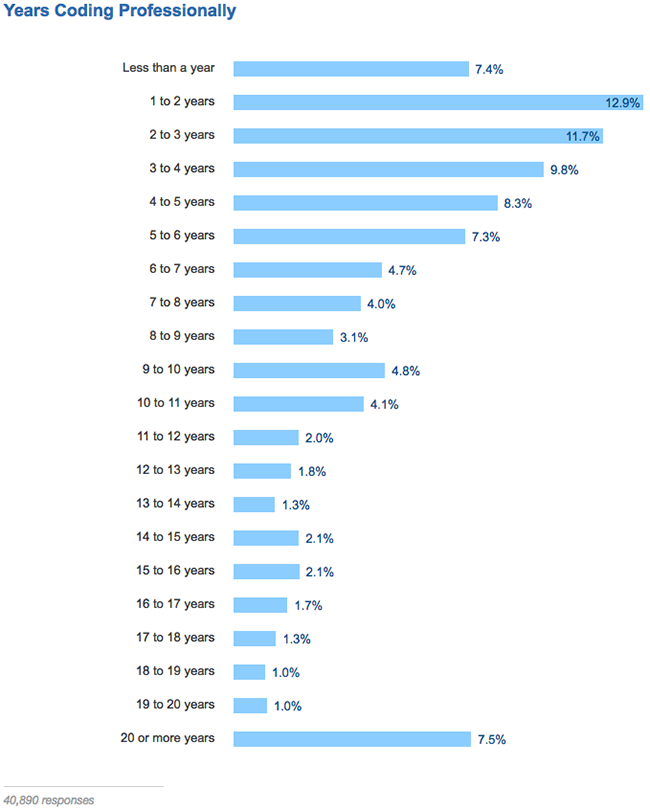 Just over 20% of all developers in the survey have been working as a developer for less than 2 years. Over 40% have less than 4 years professional experience. It is possible that this means that there is a lot of demand for beginner/intermediate content and tools to help developers learn new skills as, in my experience, this is often a bigger focus early in a developer’s career (obviously we can never stop learning, but often the types of things we tend to focus on learning differ as we get further in our careers).

While the survey doesn’t specifically get into age, it’s reasonable (in my opinion) to also infer that this 40% tilts younger as those starting out new careers tend to be younger. Why do I care? Well, mostly because I focus on content and I’ve tended to find that developers with more experience, like myself (aka old), tend to prefer written content, while younger developers tend to enjoy learning via interactive and/or video content.

The Results are Heavily Tilted Towards Web Developers

One thing that we need to consider when analyzing these results is that it is primarily a survey of web developers - even if it isn’t entirely pitched that way.

Yes, over 72% of respondents identify as web developers even though Stack Overflow would not be exclusively a web-development-focused site. I only mention this as it is probably something to take into consideration when reviewing some of the “headline stats” like which are the most popular technologies or which are the most loved and dreaded. For instance, it’s important to have in mind when you read observations like this one on the survey - it doesn’t in any way negate the perspective at all, just is a nuance to consider on things like shifting language priorities.

One of the things that stood out to me was the geographical makeup of the respondents. Given StackOverlow’s gloabl reach, I suppose that shouldn’t be a surprise. However, I have seen many developer surveys, and they all tend to get a large majority of their responses from North America, specifically the US. 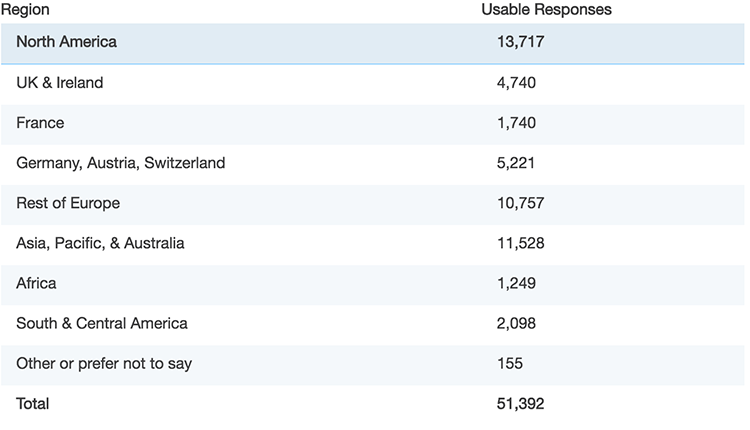 What’s interesting to me about the above is the way they break out the demographics by region where Europe is split into numerous regions. I only note that because typically I see surveys either lump the UK and Europe together, or split them up, but rarely have 4 regions representing the UK and Europe. Also interesting that if you take it as a whole, Europe and the UK represent over 20k of the 51k responses to North America’s 13k and Asia’s 11k. So pretty widely distributed, and nowhere near as North-America-centric as other surveys I’ve seen.

The survey seems to ask people for their racial/ethnic background as a combination question (I only mention because as someone who identifies as hispanic, it does not signify race - which could be hispanic white or black for instance). Anyway, while men in general don’t look great on the topic of diversity, white men did themselves no favors in this survey by being the group who apparently cares the least about diversity (by a fairly substantial margin even). 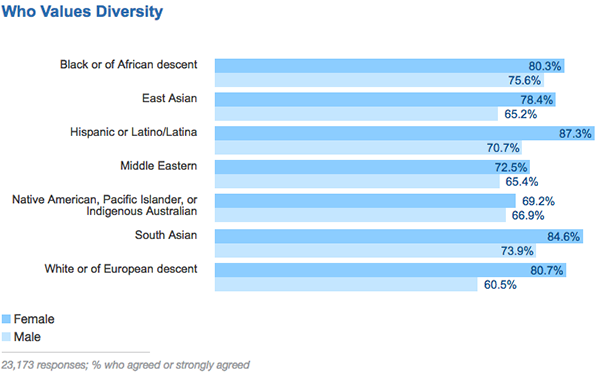 Stack Overflow’s commentary notes that the number of people who somewhat agree, agree or strongly agree that diversity is important went up significantly. However, we still have 11% who either strongly disagree or disagree that it is important on what seems like an obvious, easy “agree.” No one is even asking you to do anything about it, other than say it has value in a generally meaningless survey and even that is too much to ask…ugh!